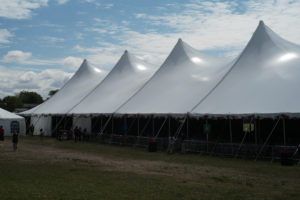 June 6, 2018
The white peaks of the huge tent for the Monlam shone bright among the surrounding
buildings in Queens like stylized mountains from another world. And indeed, inside the
structure, which filled the playing field of York College, the space had been transformed
into a Tibetan Buddhist shrine hall by the organizers of the event, the Danang
Foundation. Their months of hard work were supplemented by His Holiness, who spent
many hours yesterday including from that evening late into the night helping to arrange
and rearrange the altar until it was just right. Rising in the central space above the long, red altar was a twenty-foot appliqué thangka of a golden Shakyamuni Buddha, flanked by smaller images of his two main disciples, Shariputra and Maudgalyayana. Set on an ornate table in front of the Buddha, were a
gold wheel of Dharma, symbolizing the teachings, and a white conch shell, symbolizing
their spread. A long life vase symbolized a stable and long life for the teachers of
Dharma.

This thangka of the Buddha was brought from the seat of the Karmapas in the United
States, Karma Triyana Dharmachakra, where it has been kept since the time of the 16th
Karmapa, Rigpe Dorje. He consecrated the thangka and blessed it by conducting in its
presence a Black Crown ceremony, empowerments, and teachings. It is fitting that this
classic image is the visual focus of the 17th Karmapa’s first visit to the North American
Kagyu Monlam. It underscores the continuity of the Karmapa’s incarnations with the
17th Karmapa carrying on the activities of his predecessor.

Beneath the brilliant image of the Buddha stretches a 50-foot, three-tiered altar of
tormas (sculpted offerings), pyramids of incense, and heaps of fruit and sweets. This
year, the eight tall tormas on the top row depict the main figures of the Eight Great
Founders of the Practice lineages, brought from India to Tibet: for the Nyingma, Guru
Rinpoche; for the Kadampa, Jowo Atisha; for the Path and Fruition of the Sakya, Sachen
Kunga Nyingpo; for the Kagyu, Marpa Lotsawa; for the Shangpa Kagyu, Khyungpo Naljor;
for the Jonangpa, Dolpopa Sherab Gyaltsen; and for the Nyendrup (Approach and
Accomplishment) of the Three Vajras, Drupthop Urgyenpa. Indicating great respect for
each of these eight lineages and their founders, beneath each one, depicted on two
disks and on the base of the torma are one each of the eight auspicious symbols, the
eight auspicious substances, and the 7 seven kinds precious metals and jewels plus one of gemstones in general. Two colorful offering goddesses from the tradition of Chakrasamvara flanked each of the eight great teachers. 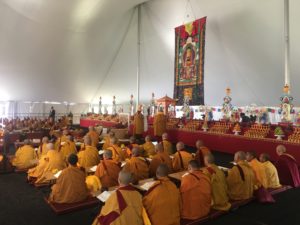 The first ceremony to be held in this magnificent setting was the early morning sojong
(fasting) vows, bestowed by the Karmapa. With the intention of making life better for all
beings, participants do not eat after the noon meal until dawn of the following day.
Once this ritual and the traditional chants in Sanskrit were over, the Karmapa made
offerings to a statue of the Buddha as young child, who stood on a lotus underneath a
red and gold pavilion at the center of the altar. The chanting for this first period of the
morning and throughout the day continued in Tibetan, often with an evocative melody,
newly composed by His Holiness.

Many of the disciples here on this first day have also traveled to India for the main
Kagyu Monlam in Bodh Gaya. Since the Karmapa was not able to attend this year, it was
with a special delight that they participated in the practices today.