Abundant Offerings to the Gurus 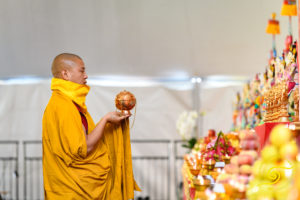 This morning a new long table in front of the shrine was filled with heaps of offerings for the practice known as “A Ritual of Offerings to the Gurus.” Performed on the last day of the Monlams, it is a way to offer all of the virtue accumulated through days of practice to the great teachers, so that they may live long lives and spread the Dharma for the sake of all beings. In the Introduction to the ceremony, the Gyalwang Karmapa spoke of its essence: “The ground of all excellence in this and future lives, the root of all paths, the best means of progress, the guide to higher rebirth and liberation, and the source of all instruction is the guru, the spiritual friend. If you know the reasons why this is so and have appropriate devotion, you will see the meaning of the dharmata.”

The ritual was composed in 2005 by the Karmapa, who wrote, “I read and carefully studied the words and meaning of ceremonies composed by the gurus of many traditions.” After listing texts from the various traditions including the first Dharma to reach Tibet, he concluded, “ I then carefully extracted from them everything that matched the present purpose and topic in a way that is accessible to ordinary people.”

In addition to eloquent descriptions of the offerings, the text contains profound teachings. For example, during the praise of the guru’s vajra body, speech, and mind, we find this verse:

The glorious essence of the five elements,

I prostrate to your vajra body:

Nothing yet the essence of all things.

According to the instructions of the Karmapa, the theme of this year’s celebration is the spirit of New York with a view to environmental protection as well. Since the Kagyu Monlam takes place worldwide, the organizers in each country seek to represent what is characteristic of their region. This year’s offerings were designed to represent New York through four items, which were packed in recyclable paper boxes. Since New York is known as the Big Apple, this fruit could not be ignored, so the box included dried apples. New Yorkers love pretzels, the butterfly-shaped salty bread originally introduced by German immigrants. Coin-size versions were specially ordered so that they fit in the box. Yellow cabs, an icon of the city, are also made into cookies. And finally, Koppers, a famous chocolate shop that opened in 1937, has created a unique chocolate called “New York Expresso Mix,” which also made it into the selection.

The fourteen nuns from Bhutan along with ten volunteers packed 2750 boxes in the office of the Danang Foundation one day before the Monlam started. In doing so, they followed His Holiness’s instructions to waste as little as possible, and in addition, seasonal fruits, such as bananas and oranges, were selected to minimize carbon waste. In all these ways, the participants sought to fulfill both the Karmapa’s practical and his spiritual aspirations by being environmentally aware and spiritually conscious.