Practical and Spiritual Ways of Benefitting Others 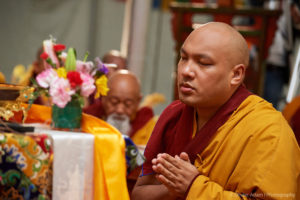 Practical and Spiritual Ways of Benefitting Others

Before giving the sojong (fasting) vows today, His Holiness gave a brief explanation of their meaning. “Taking these mahayana fasting vows for one day is actually intended for householders and lay people, allowing them to purify their negative actions and gather virtue. That said they can also be taken by the ordained sangha as long as they stay aware of the difference between taking these vows and those especially for them. 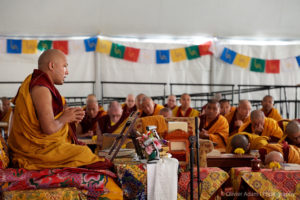 “Speaking of the benefits of the vows,” the Karmapa began, “the ritual itself states that we are taking the vows, ‘for the sake of all sentient beings,’ and in the case of the mahayana vows for lay people, the focus is ‘ to eliminate famine and ‘to eliminate illness.’ It is said that if a particular place or country is suffering from famine or a contagious disease, for example, the people living there can take these vows to alleviate these problems. For this reason, the mahayana sojong vows are also known as ‘the fasting vows that create auspiciousness.’” 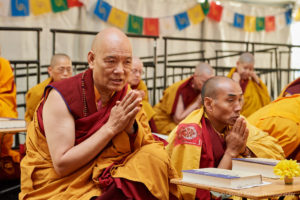 It is not only through taking sojong vows that the North American Kagyu Monlam is benefitting the surrounding area. In line with the Karmapa’s wish that through charitable activities, the Kagyu Monlams benefit the area in which they are held, the organizers of the Monlam have arranged for all the surplus packaged food as well as other donations be given to a local food bank in Queens. In addition to making donations to help people in the area, the Danang Foundation’s organizers have used only biodegradable plates, cups, and flatware in harmony the Karmapa’s commitment to protecting the environment. In these ways, both the Karmapa’s practical and spiritual aspirations are being fulfilled. 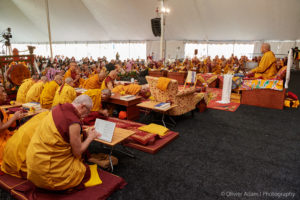